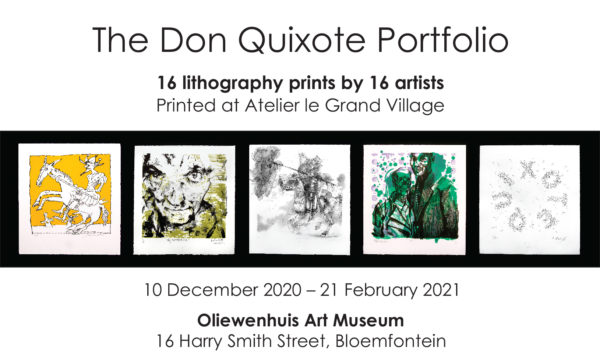 Oliewenhuis Art Museum is pleased to announce that a recent donation, The Don Quixote Portfolio, will be on exhibition from 10 December 2020 to 21 February 2021. The portfolio was inspired by Spanish writer Miguel de Cervantes’ novel ‘Don Quixote’ published in two parts – part 1 in 1605 and part 2 in 1615. Illustrating selected quotations from Cervantes’ novel, which appear as printed sheets in the portfolio, it features the work of 16 artists and was printed at Atelier le Grand Village.

Atelier le Grand Village is a lithography studio located in the hamlet ‘le Grand Village’ in the Charente-Limousine area, in the south-west of France.  The founder, Francis van der Riet, was born and grew up in the Eastern Highlands of Zimbabwe.  He studied in Cape Town and has lived in France since 1988. The aim of the studio is to revive the art of lithography by inviting artists in residence from around the world.

The Quixote / Quichotte Portfolio was one of the first group projects of the studio.  The idea was for a collection of artists that had previous residencies at the studio, to contribute to this portfolio, with the aim of showcasing the richness of lithography as a printing technique. It also shows how artists personalise the technique, resulting in a rich variety of styles.  The portfolio of 16 artworks, 39cm (h) x 36 cm (w) took around 5 years to complete.

From the start it was agreed with the artists that each would receive one edition of the portfolio and that the studio would donate editions to institutions in the countries where the artists came from.  As the majority of the artists are South African, it seemed fair and appropriate to donate an edition to two institutions in South Africa.  Atelier le Grand Village have already donated one edition to the Iziko South African National Gallery.  Willem Boshoff suggested that the studio approach Oliewenhuis Art Museum, and the Advisory Committee gladly approved an edition to be accepted into the Permanent Collection. It was a wonderful opportunity to expand the collection and is in line with Oliewenhuis Art Museum’s objectives for the collection which include; ‘To collect, document, conserve and research works of art acquired through purchase, commission, bequest and donation.’

Victoria and Albert Museum, London and the Albertina collection, Vienna.

Oliewenhuis Art Museum is located at 16 Harry Smith Street, Bloemfontein. The visiting hours during Level 1 is from Monday to Friday between 09:00 and 15:00, Saturdays between 10:00 and 15:00 and closed on Sundays and public holidays. Entrance is free and secure parking is available for visitors. A ramp at the entrance of the main entrance provides access for wheel chairs, while a lift provides access to the Permanent Collection display areas on the first floor.

For more information on Atelier le Grand Village please visit www.legrandvillage.net and follow all the happenings at the studio on Instagram (@atelierlegrandvillage).

The exhibition is made virtual for all to enjoy until the museum opens to the public, and then visitors will be able to enjoy and experience the exhibition at Oliewenhuis Art Museum.

Africa’s diverse cultural heritage and dignity is uniquely celebrated by the work and life-long commitment of artist and global Ndebele cultural icon, Dr Esther Mahlangu. Art curator and writer, Beathur Mgoza Baker reflects on how: “Her life defies chronology and her talent, defies the conventions of the Western art as a truly African articulation of our collective cultural heritage”. In South Africa we embrace her as a national treasure, a wise elder and passionate, committed ambassador who has captivated the interest and imagination of the world with her gift, and her beautiful understanding of how art is central to our cultural identity as human beings. Even at the age of eighty three the iconic artist still continues producing work and creative interpretations of the sacred geometry and practices of Ndebele and African culture.

A selection of her artworks and heavily beaded blankets in celebration of the artist and Africa month is on show in the Main Building of the Art Museum.

Opening speaker: Adelheid von Maltitz, Lecturer and acting Academic Head of the Department of Fine Arts at the University of the Free State

Harmonia: Sacred Geometry, the pattern of existence by Gordon Froud

“Geometry is widely held to be the universal plan on which all material existence is based. The patterns of proportion, shape, form and numbers are found in the smallest atomic structures and are perpetuated at every level of existence even as far as a pattern for the expanding universe in which we live. Most belief systems acknowledge geometry as a plan; blueprint or map on/through, which matter, has come into being. This has variously been described as the thoughts of God, divine utterances, proof of a creator, a master-plan and so on. In its application geometry (Greek for earth – geo and meter for measurement) it is thus often imbued with notions of the divine or the sacred referring to a creator or God or energy force.” Gordon Froud 2018

Gordon Froud, well-known sculptor, Senior Lecturer in sculpture at University of Johannesburg and curator is presenting a new body of work that investigates various aspects of sacred geometry in the world around us. His cone virus sculptures (pointed polyhedra) have become iconic in the cities and towns of Johannesburg, Pretoria, and Stellenbosch and most recently in Richmond in the Eastern Cape on rooftops, in parks and on the streets. Having featured steel mesh geometric sculptures at Nirox Sculpture Park, Hermanus Fyn Arts festivals, Boschendal and Almenkerk wine estates, Froud has constructed a show that brings his research into focus for a monumental mid-career show at the esteemed Standard Bank Gallery in Johannesburg. This show has since travelled to Cavalli Equestrian Estate Gallery in Somerset West, KKNK festival, Oudtshoorn and will be on show at Oliewenhuis Art Museum from 16 May – 23 June 2019.

This show, however, extends to more than his sculptural works and includes drawing, printmaking, digital imaging, embossing and even animation. Froud looks at sacred geometry in the landscape, the cityscape, in the human form and in the spirit. Each of these chapters reinforces the proliferation and extent to which geometry is inherent to our existence and to the overall pattern of the universe. His exploration of the spiritual is not partisan (as he does not ascribe to a particular belief system himself) but looks at sacred geometry in most belief systems from ancient Egypt, Mayan temples, Judeao-Christian, Muslim and other beliefs, to contemporary beliefs in alien and inter-dimensionality of beings, crop circles and the like.

This extensive body of work (over 100 pieces) ranges from small-scale crystal glass works to a monumental 6.5m high polyhedron made from 18 giant road cones – manufactured and sponsored by Sinvac Plastics in Pretoria. An extensive catalogue was published and serve as a contextual retrospective of Froud’s 35 year career so far. The catalogue includes interviews, academic articles and an in depth chapter by Froud on the work for this exhibition.

Harmonia: Sacred Geometry, the pattern of existence will be opened by Adelheid von Maltitz,

Lecturer and acting Academic Head of the Department of Fine Arts at the University of the Free State at 19:00 on Thursday, 16 May 2019 in the Reservoir, Oliewenhuis Art Museum.

Attendance of both the opening and walkabout events are open to the public to attend and free of charge. Oliewenhuis Art Museum is located at 16 Harry Smith Street, Bloemfontein and is open from Monday to Friday between 08:00 and 17:00, and on Saturdays, Sundays and public holidays between 09:00 and 16:00. 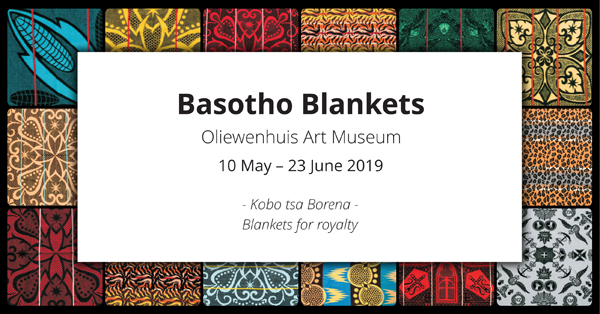 What makes this collection of blankets unique is the time span over which it was collected. The collection includes a Sandringham mountain rug or Mohodu dating back to 1934, a Badges of the brave blanket honouring those who fought during World War II (1939-1945) as well as a Batho ba Roma blanket made to commemorate Pope John Paul’s visit to Lesotho in 1988. But certainly the most prestigious blanket in the collection is the Victoria England / Seanamarena or ‘chief’s blanket’. All of the above-mentioned blankets will also form part of the exhibition. 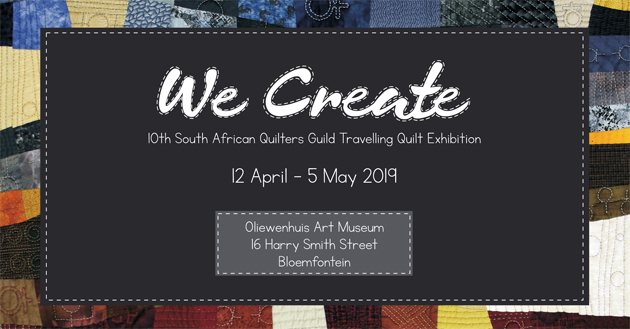 The quilts on exhibition were selected from entries in the Siyadala Competition and were chosen to inspire and educate the viewers about the different styles and techniques, colours and designs used to create this collection of quilts.

This collection under the title ‘We Create’ has travelled across the country to various destinations and regions and will conclude at the SA National Quilt Festival in Midrand in September 2019. The opportunity to admire and see the talent and creativity of South African Quilters is not to be missed.