Oliewenhuis – a Neo-Dutch style mansion – was designed by William Mollison, Head Architect of the Department of Public Works and his assistant, John Stockwing Cleland in 1935. Completed in 1941, this mansion, located on Grant’s Hill, served as residence for the Governor General of the Union of South Africa from 1942.

In 1972, the building was officially named Oliewenhuis, the name being derived from the abundance of wild olive trees growing on the surrounding hills.

On 19 July 1985, after prolonged campaigning by the art loving citizens of Bloemfontein for an art museum, former State President P.W. Botha released the residence to the National Museum for the purpose of converting it into an art museum. Several structural alterations and adjustments had to be made to the existing building to provide a suitable environment for the conservation and exhibition of artworks. On 11 October 1989, Oliewenhuis Art Museum was officially opened as a satellite of the National Museum. The Museum boasts up-to-date technology to store and exhibit artworks in ideal climatic and security conditions.

The Museum is located in one of the most magnificent gardens in the city, a large section of the property comprises natural vegetation bordering on the Museum grounds. It is the only museum of its kind in the Free State and one of the youngest art museums in the country.

Oliewenhuis Art Museum’s mission is to collect, conserve and exhibit works of art which represent the heritage of South African art on behalf of and to the advantage and edification of the entire community.

The Art Museum is committed to the development of human resources in the fields of arts and culture and fulfils its mission by means of publishing research and information relevant to its collection, and by providing advice on purchases to members of the public, corporations and public institutions. The Museum strives to actively participate in the artistic life of the Free State Province. The Museum co-operates with other museums with regard to exhibitions and the promotion of arts and culture; it commissions artworks from young artists with an emphasis on regional talent and actively supports artists of the region by providing advice and information on exhibiting and marketing of artworks.

In addition, the Museum has committed itself to setting standards of quality and clarity both for its collections and exhibitions. By collecting and exhibiting the best work it can afford, the Museum fosters in the community a sense of pride and ownership of the Museum’s holdings, programmes and goals.

PELMAMA is an acronym for the “Pelindaba Museums of African and Modern Art”, a project initiated by The Haenggi Foundation Inc., Johannesburg, South Africa, an Association not for Gain established in 1978, after the 1976 Soweto riots.  A number of works originally from the Pelmama Permanent Art Collection are on view at Oliewenhuis Art Museum and are depicted on this web site. Visit the PELMAMA website.

The idea of a carousel grew out of the Museum’s desire to initiate a public sculpture commission that would engage more than one artist working in materials not normally used for outdoor public commissions. The commission was a nation-wide project aimed at integrating European as well as African concepts of mythology reflecting the diversity of cultures coexisting in South Africa.

The Carousel also lends itself to introducing a wider concept of art making to audiences, including movement, physical use and fun while still being serious in its aesthetic content. The focus of the African Carousel Project was also to introduce children to the concept of art in an unintimidating, fun way and in so doing, to build an audience for the future.

The Project had its beginnings in 1994 and took approximately three years to complete. The following generous donors ensured the successful completion of the Carousel:

The Foundation for the Creative Arts
The Department of Arts, Culture, Science and Technology
The Friends of Oliewenhuis Art Museum
Art and Culture Trust
Father Frans Martin Claerhout 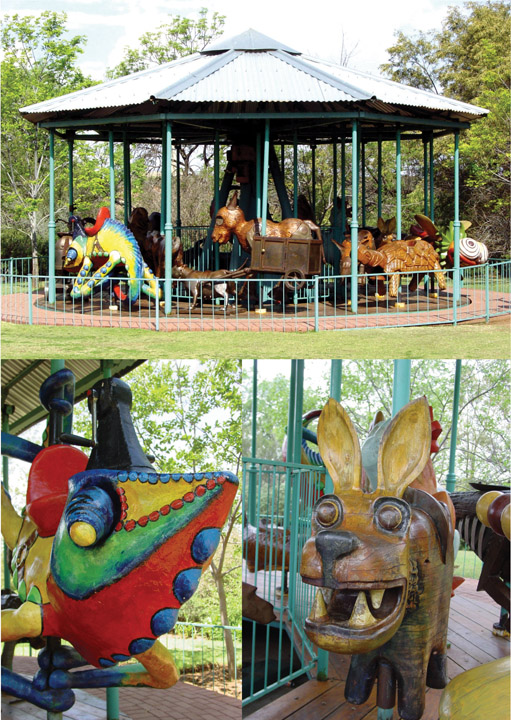 The Reservoir at Oliewenhuis Art Museum

During the planning phase of the African Carousel at Oliewenhuis Art Museum in 1994, a site plan of the back garden was requested from the Department of Public Works. An underground construction north of the building was indicated on the plan. The only access to the area was via a manhole. On further investigation, an underground reservoir was discovered containing approximately half a metre of water. Pipes leading into the structure and an outlet pipe (dated 1902) situated at its southern corner indicated that it was probably built as a catchment basin for the surrounding area. As far as can be ascertained, the reservoir was built in approximately 1904 and excavated out of almost solid granite. The inside measurements of 14 x 33 x 3.2 metres allowed the reservoir to contain approximately 1440 cubic metres of water. With a surface area of 450m², the structure is supported by two rows of five ironstone pillars supporting two concrete beams on which a vaulted roof rests. The walls and the floor, not fully waterproof, consisted of cast concrete. This allowed water to seep through and collect in the reservoir.

One of the most important aspects considered during the transformation of the reservoir into an exhibition space was to make it completely waterproof. To seal the walls and floor, brick walls were built on the inside of the existing concrete walls and a concrete floor was cast. To allow access to the venue meant that excavations had to be made directly next to the reservoir. This however led to numerous construction problems. The solid rock could not be removed by ‘blasting’ due to the fact that severe movement could lead to damage or destruction of the existing structure. The solid rock was eventually removed manually using pressurised air drills.

Planning for the transformation of the reservoir into an art gallery began as early as 1996 and the project was completed in November 2002. The Reservoir is a unique space, which allows Oliewenhuis Art Museum the opportunity of extending and augmenting its activities.

The transformation of the reservoir was financed by the National Department of Arts & Culture.

Surrounded by 12 hectares of natural vegetation on Grant’s Hill, Oliewenhuis Art Museum offers access to four marked walking trails through unspoilt natural surroundings. The walking trials are easily accessible to young and old and offer a unique opportunity to experience the beauty and tranquillity of the area. The Museum gardens also offer ideal picnic spots.