New temporary exhibition | Ancient monster: A look at the origin of mammals 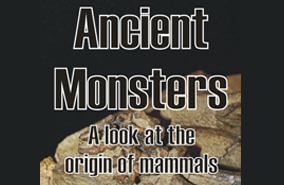 The Karoo Palaeontology Department at the National Museum, Bloemfontein is proud to announce a new temporary exhibit showcasing the department’s exceptional fossils that demonstrate one of the most significant transitions in evolutionary history – the evolution of mammals. Known as therapsids, they are the precursors to modern mammals and represent some 75 million years of pre-mammalian evolution. Although not as big as some of the largest dinosaurs, they still include some of the most frightening carnivores of the time, such as the sabre-toothed gorgonopsians, as well as the tiniest non-mammaliaform cynodonts, the closest relatives to mammals.Come and see these amazing fossils from the South African Karoo, many of which were discovered in the Free State, and learn about the ancestors of mammals.