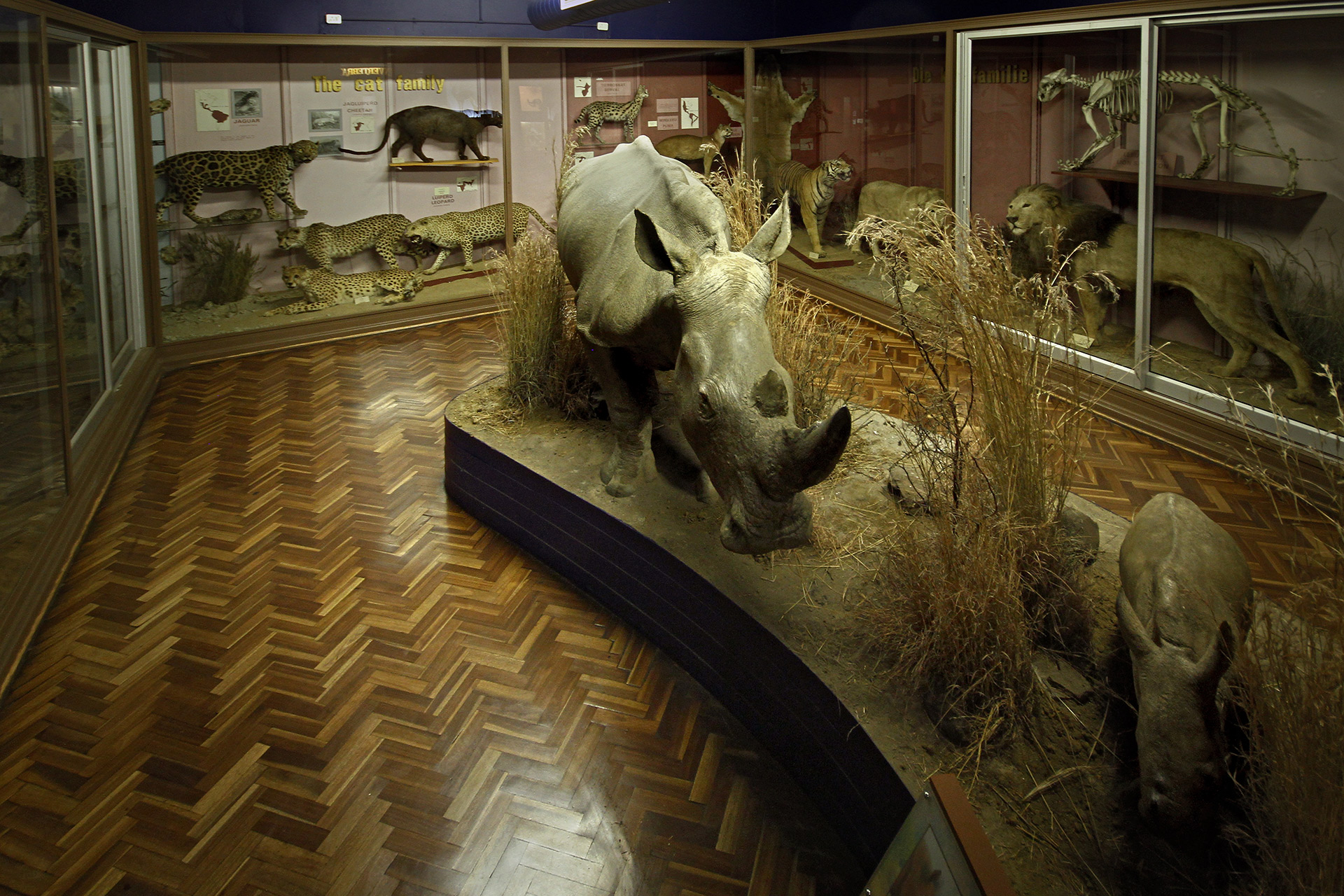 The majority of species exhibited in the extensive Mammal display are indigenous to the Free State, but species from the rest of southern Africa and the world are also showcased.

Some of these are very rare, such as the Aye-aye from Madagascar, Chimpanzee from central Africa, the Urang-utang from Borneo & Sumatra, Canadian Lynx from northern America, the Brown Bear from Alaska & northern Eurasia, the Three-toed Sloth, Giant Anteater and Jaguar from central and south America, the Platypus (in the Palaeontology Hall) and Echidna from Australia, the Bactrian Camel from central Asia, and the Bengal Tiger from Asia.

The world’s first life-size fibreglass reproduction of an African Elephant bull, flanked by two fibreglass calves, is situated prominently at the top of the main staircase. “Operation elephant” was undertaken by Museum staff in 1971. Plaster of Paris casts of an elephant were made in the Kruger National Park; fibreglass forms were cast, reassembled and finished off in the Museum. Globally, elephants fall into the conservation status category “Near Threatened”. Conservation in South Africa has, however, been so successful that the problem of keeping elephant numbers down now exists, as too many elephants living in too small a space decimate the environment around them.

The Ground Pangolin is essentially an armour-plated anteater. Seeing one of these creatures in the wild is a rare privilege, as they are very shy and rare. Pangolin used to be found throughout the Free State, but have not been seen in the Province since 1985. Pangolins are slow moving and search for their food alone. They eat ants and their larvae, but their favourite treat is a feast of juicy termites.

When threatened, pangolins roll into a tight ball, protected by their scaly armour. Sadly, capturing a pangolin is considered by rural African communities as a lucky omen, celebrated by the entire village. After the unfortunate creature has been eaten, tradition holds that its scales are a sign of good fortune and are worn to ease rheumatism or a swollen spleen, and even to help with fertility problems. Pangolins are classified in the South African Red Data Book as “Vulnerable”.

Although the conservation status of the Black Wildebeest is currently “Of Least Concern”, a century ago this species was virtually extinct. In the 1800s uncontrolled hunting decimated wild animal populations, threatening some species that had once roamed the plains of South Africa in herds of thousands. In 1860 a hunt was organised on a Free State farm for Prince Alfred of the British Royal Family. Records show that within a few days Prince Alfred and his guests systematically slaughtered about five thousand head of game. Hunting on this scale was by no means uncommon during this era. The Black Wildebeest was reduced to a few hundred individuals sheltered on the land of a few visionary Free State farmers. These animals are the ancestors of all Black Wildebeest found in the world today. However, a new threat, from a totally unexpected source, today threatens the future of the species. In the wild, Black Wildebeest do not interbreed with their near cousins, the Blue Wildebeest. However, on game farms and reserves, these two species are often kept together, and it was soon observed that Black and Blue Wildebeest can mate and produce fertile offspring that display attributes of both species. After all, the two species are closely related, and the Black Wildebeest originally evolved from a Blue Wildebeest ancestor in central southern Africa. As Blue Wildebeest males are typically larger than Black Wildebeest males, they out compete them for the attentions of Black Wildebeest females. Left unchecked, the Black Wildebeest could disappear, to be replaced by hybrids. Conservationists have taken steps to solve this problem, including separating Black and Blue Wildebeest populations, and destroying fertile hybrids. This specimen was mounted by Hermanus H. ter Meer, Leipzig, Germany, 1932. 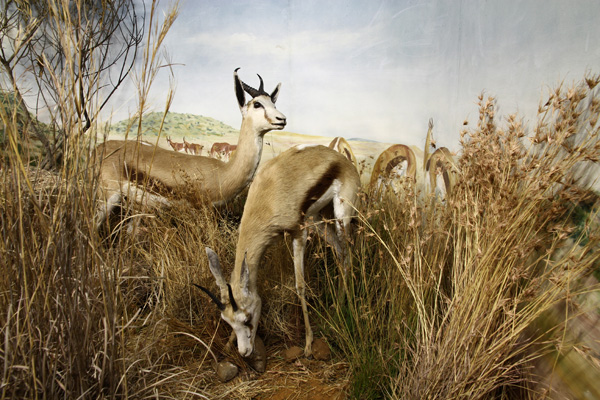 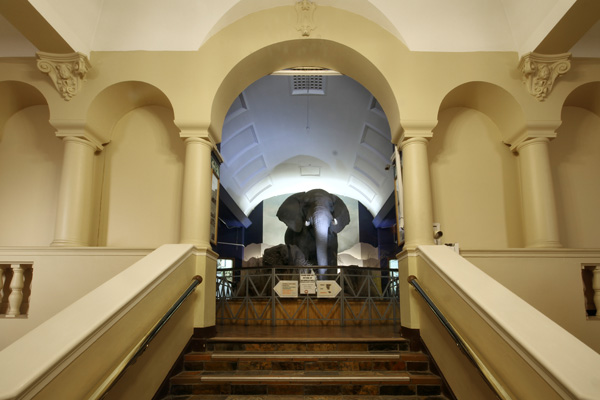 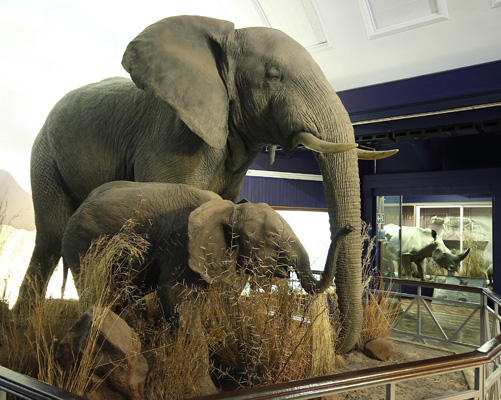 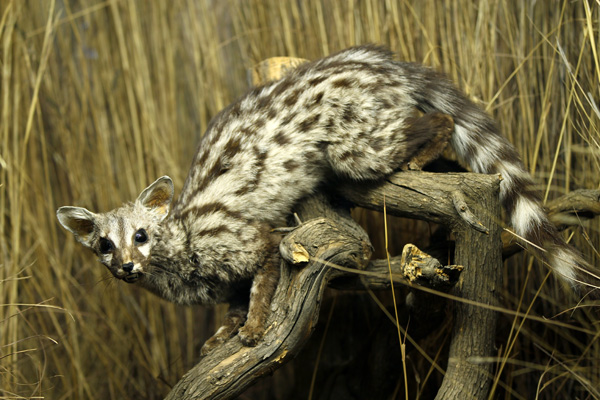 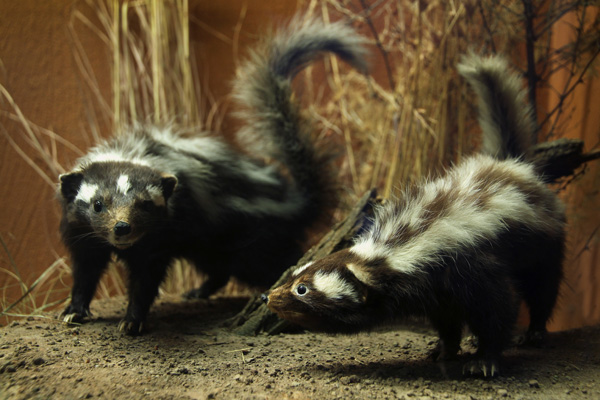 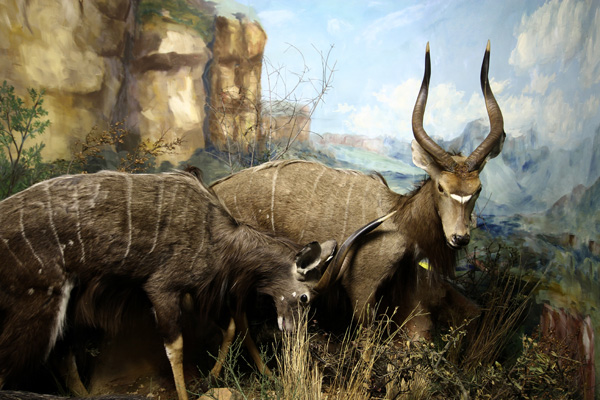 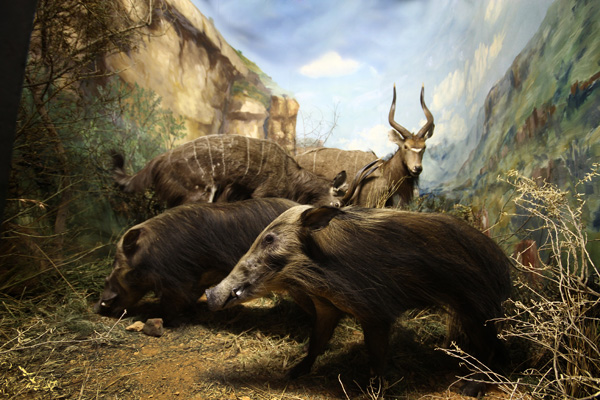